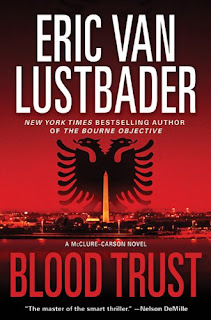 Hardcover, 400 pages
Published May 10th 2011 by Forge Books
ISBN 0765329743 (ISBN13: 9780765329745)
Blood Trust is the third geo-political thriller featuring Jack McClure and Alli Carson. In this story, Alli is now a recruit at Fearington in training to be an FBI agent while being mentored by Jack McClure, National Security Advisor. When Alli is accused of murder all hell breaks loose. She and many others feel she is being framed. Although her powerful billionarire uncle, Henry Holt Carson, insists he is looking out for her interests, his actions speak otherwise.
Dennis Paull, Jack's boss, gives him the assignment of eliminating a powerful kingpin of the Albanian mafia, Arian Xhafa. He's thought to be behind an international slave trade operation whose  greedy tentacles reach around the globe and have definitely infiltrated the powerful people back in Washington, D.C.
Jack's ability to see the "big picture" is an enormous help to him in putting together pieces of any puzzle. He will need all his skills in this assignment as nothing is what it seems and almost no one is who or what they purport to be. Alli escapes her uncle's protective custody and accompanies Jack on his high speed chase around the globe leaving a trail of dead bodies in their wake both in Macedonia and back in the USA. Many risky encounters have Alli and Jack defending themselves over and over and their actions heighten the race to eliminate Arian before he eliminates them.
I read and reviewed  Last Snow last year and truly enjoyed the book; so much in fact that I went on to read the previous book, First Daughter. Blood Trust has a lot of familiar characters in it but it is not really necessary to have read the former book as this one can stand alone. In Blood Trust, while I did enjoy the complicated twists and turns of the plot, it seemed to me there was a lot more gratuitous violence and offensive language than the previous book. After a while it became almost monotonous; "less is more" is an adage that can be applied in this case.

As for characters, I do like Jack McClure and find him to be a lot more believeable than Alli. She is given almost super hero capabilitites that did not ring true for me throughout the book. If you can suspend a little disbelief in her case and ignore the plethora of *F* bombs, then you will enjoy this thriller. 3.5***
Disclosure: A review copy of Blood Trust was provided by Tor/Forge Books in exchange for my honest opinion of the book.
To read more about the author, Eric Van Lustbader, you can visit his website or find him on twitter.
Through the generosity of Tor/ Forge Books two paperback copies of recently released, Last Snow and one hardcover copy of Blood Trust are up for grabs. Be sure to leave an e mail address in your comment. As always, bonus entries can be earned by:
+2 for being a follower,old or new. Just remind me how you follow and under what name.
+3 for posting to sidebar with link or tweeting. Just leave me a link to post or tweet, please.
Deadline to enter is June 3rd at 5 P.M. (est). Good luck!