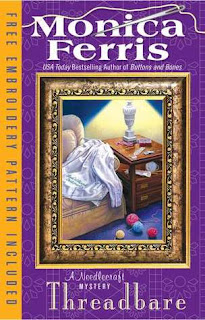 When an elderly homeless woman is found dead on the shore of Lake Minnetonka, she's wearing something that holds the key to her identity but also opens up a mystery. Embroidered on her blouse is her will, in which she bequeaths everything she owns to her niece-Emily Hame, a member of the Monday Bunch at Betsy Devonshire's Crewel World needlework shop!

Emily's aunt turns out to be the second homeless woman to be found dead under mysterious circumstances. It's up to Betsy to discover the common thread between the deaths-and to determine if a murderer may strike again.

Betsy gets drawn into the investigation at the bequest of Margaret, one of her customers. The first homeless woman was Margaret's cousin and there was a bit of bad blood between them. Of course, the police upon hearing of this determined that Margaret was a person of interest. She begs Betsy to look into it since Betsy  has the reputation as a successful amateur sleuth.

The problems begin when numerous motives are uncovered and suspects start to pop up. With the help of Annie, another homeless woman who knew the two deceased women, Betsy carries out her investigation from Excelsior all the way to Fargo.  One of the big problems is who was the intended target? The first body found or the second? Who actually died first? Since they were both found frozen in the snow, it's hard to determine.  Even with some "inside" help, it's going to be a case that is all tied up in knots and Betsy has her work cut out for her untangling all the threads in the lives of these two women.

Although this is # 15 in the series, I don't feel like I missed anything by only having read a couple of the previous books. This one is easily a stand-alone. As far as the mystery goes, this was a good one due to the two deaths that had a lot of things in common. The fact that the women knew each other, both had relatives in town, and both had stayed at the same shelter made for some intriguing reading. The reader is not quite sure who the intended target was if not both. Why on earth would someone have it in for homeless women. Why would a homeless woman who owns next to nothing even make a will in the first place? Veddddy vedddy interesting!

Due to the ever so generous Berkley, I am able to offer a giveaway of one copy of this book. Open to US only with the deadline to enter being Dec 27th at 5 PM (est). Bonus entries are as follows:

+2 for being a follower, old or new. Just remind me how you follow and under what name.
+3 for blogging (sidebar is fine) or tweeting about the giveaway. Leave me a link, please.


If you cannot comment you can still enter by sending me an e mail with Win Threadbare in the subject line. Include your name and e mail and send to florida982002[at]yahoo.com

Disclosure: A review copy of the book was provided by Berkley in exchange for my honest opinion.