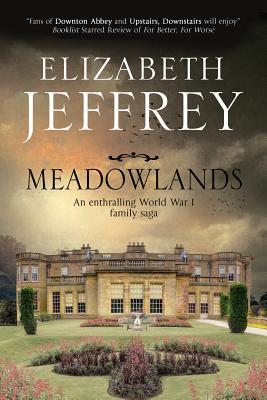 ISBN: 0727884697 (ISBN13: 9780727884695)
From Goodreads:
The comfortable, upper-class lives of the aristocratic Barsham family are set to change forever with the onset of World War I."
August, 1914. The silver wedding celebrations of Sir George Barsham, MP, and his wife, Lady Adelaide, are overshadowed by the declaration of war with Germany. Over the following months, as the male estate workers head for the Front and the maids disappear to work in the newly-opened munitions factory, the Barsham family s comfortable, aristocratic lifestyle is set to change forever.
Determined to do his bit for King and country, James Barsham enlists as an officer and heads for Flanders, leaving Lady Adelaide s maid Polly devastated. To Lady Adelaide s dismay, her younger daughter Millie learns to drive an ambulance: a most unladylike skill. Meanwhile Millie s sister Gina finds fulfilment in helping the local wives and children, left destitute while their husbands are away fighting.
During the course of the war, with devastating loses, the strength of character of the four Barsham siblings will be tested as never before. They will encounter hardship, danger, heartache and unexpected love.


My Thoughts:. With the popularity of Downton Abby, a historical drama on PBS,it seems there have been quite a few books set during the same WWI timeframe all with all the same "upstairs downstairs" themes and characters seemingly from the same mold. I swear I've read about a butler ironing the newspaper over and over. I still remember Mr. Hudson from Upstairs, Downstairs, ( PBS drama from the 1970's) ironing the newspaper.  So . . . . . .

I started out thinking this was going to be one big clichéd story but then found myself engrossed in the book right away. I was anxious to see what happened with all the  characters especially Polly, James and Gina. I think the author did a credible job with the historical bits and feel of the time, especially the effects of wartime hardship on poor families. It is hard to imagine what those  injured soldiers and their families went through but Ms. Jeffrey really brought these tragic circumstances to life.

Okay, so a few bits were a tad predictable, and yes, Lady Adelaide was more than just a bit annoying, I still enjoyed the book immensely. If you're a fan of romance, family drama, historical/WWI stories or British fiction, this could be the book for you. 4****

Elizabeth Jeffrey was born and grew up in Wivenhoe, the village of her parents and grandparents. Far from being born with a quill in her hand, Elizabeth didn't start serious writing until after her children were born, beginning with short stories - on the premise that not so much paper was wasted if they were rejected! She won first prize in a short story competition run by the Daily Express, which led to an invitation to write for Mills & Boon. This was a useful stepping stone and after publishing five titles for them she moved on to writing historical novels. Her third novel, Cassie Jordan, was short-listed for Angel Prize for East Anglian writers and later The Buttercup Fields (under the title. The Chair Mender,) was short-listed for the very first Catherine Cookson prize. She has written over 15 novels. http://www.severnhouse.com/author/Elizabeth+Jeffrey/9433   Author info from Severn House Publishers website.

Disclosure: A review copy of the book was provided by Severn House Publishers/Netgalley in exchange for my honest opinion.