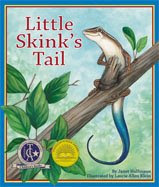 After happily sunning herself on a rock, Little Skink went hunting for breakfast. Smells like ants. Yum! Then out of the air a big black crow swooped down trying to grab little skink for it's own breakfast. The crow was getting too close to her blue tail for comfort so she did what any skink would do. She snapped off her tail and that is all the crow could see. It wanted that blue wiggling tail.
Even though she is now safe, she misses her pretty blue tail.When the other animals in the forest start to emerge, little skink begins to wonder what it would be like to have a tail like theirs. She looks at the rabbits tail and thinks too puffy-fluffy and so the day goes by as little skink rejects one tail after another. The deers's tail is too short and stubby and a skunks tail is just too stinky to even think about. Lizards don't look good with feathers so that leaves out the owl and a porcupine's tail, 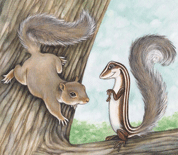 well, that is just too stickly-prickly. A squirrel's tail is too bushy for little skink! A few days later she sees her shadow and it has a tail. Her pretty blue tail grew back again. Ahhh, this is the tail that is just perfect for little skink.
This is an absolutely delightful story geared to ages 4-8, encompassing not only entertainment but education. I like the message that you are great just the way you are. All the illustrations are so beautifully and cleverly done they will bring a smile to anyone reading the book. Little skink almost seems to be smiling as the illustrator does a wonderful job with facial expressions on all of the animals. At the end of the book is a footprint map that includes all the animals in the book . There is also a tail matching activity along with facts about each tail. Ms. Halfmann's book has received the Teacher's Choice Award for 2009 and also the President's Book Award from the Florida Publisher's Association, Inc.
Janet Halfmann has been writing for children for more than twenty years, and this is her 28th book. Before becoming a full-time f

reelance children’s writer, she was a manager, editor, and writer of coloring and activity books for Golden Books; the editor of a national children’s magazine; and a reporter for a daily newspaper. A member of the Society for Children’s Book Writers and Illustrators, Janet has recently published Alligator at Saw Grass Road (fall 2006), Polar Bear Horizon, Canada Goose at Cattail Lane, Dolphin's Rescue, Red Bat at Sleepy Hollow Lane, and Pelican’s Catch. Janet was inspired to write Little Skink’s Tail while researching for one of her other books, Nature’s Predators: Lizards, and for an article that she wrote for Ranger Rick, “Slinky Skinks.” Another inspiration was her granddaughter, whom she enjoys watching play dress-up and pretend. As Janet wrote the book, she pictured her granddaughter putting on and showing off each tail.
Laurie Allen Klein has been a freelance artist for nearly 20 years. Over the last several years she has worked as the on-staff artist for a marine park, where she does everything from painting life-size sea animal murals, to illustrating children’s activity books. In addition to Little Skink’s Tail (watercolor), Laurie also illustrated If a Dolphin Were a Fish (colored pencils) for Sylvan Dell. Her other books include the Out to Pasture series, authored by Effie Wilder.
Author and illustrator info from the Sylvan Dell website. A big thank you to Janet Halfmann and Sylvan Dell for sending me this marvelous book. I truly enjoyed it!
Posted by Kaye at 9:35 AM