Review & Giveaway: One Scream Away by Kate Brady 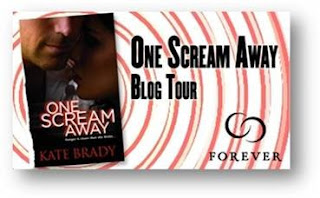 "Killer Chevy Bankes is a master of disguise, and just paroled, he's coming after the woman who sent him to jail, the beautiful antiques expert Beth Denison. A set of antique dolls brings Beth into his sight, and inspire Chevy's disturbing crimes as he draws closer to Beth and her young daughter. Chevy sends the dolls to Beth one-by-one and she soon realizes that these antiques carry the same marks as his victims, signaling that the final piece in his collection will be for her. Neil Sheridan gave up his FBI shield five years ago, but his best friend Rick, a cop, pulls him in as a consultant on a case involving a serial killer who is eerily similar to a murderer Neil encountered in the past. The investigation leads Neil to Beth's doorstep, and he is certain she isn't telling him the truth. Neil is the only one who can get through Beth's defenses and, as they grow closer, discover the secrets that Beth is hiding about her fateful night with Chevy".
My Thoughts:
Wow, this is chilling suspense that is riveting from the very beginning. Brady is expert at making the characters come right off the page. I could just feel Beth's relief when she finally breaks down and tells Neil Sheridan what really happened the night she and Bankes crossed paths. Her secrets are now in the open but her terror is on the rise. The suspense builds and builds to a breath stopping crescendo. As the killer gets closer and closer, Beth's gut wrenching fear is almost palpable when diabolical Chevy Bankes places his next taunting phone call.
The story is not all horror and suspense as Brady manages to incorporate a romance between Beth and Neil. This is a somewhat predictable element but does not detract in any way from the entire book. The rest of the story is anything but predictable. There are so many psychological twists and turns to this story, I just could not put the book down until the end. And what an ending it is! The plotline with Chevy's sister, Jenny, had me guessing until the last page. For fans of romantic suspense or thrillers, this is one book you don't want to miss. For it's genre, it gets a rating of 5***** from me. 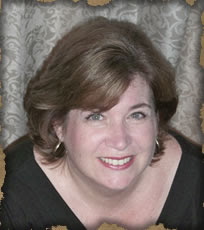 About Kate Brady:
My writing career began in the closet, where--thankfully--my first several novels remain. As a full-time choral conductor and assistant professor of music education, I didn't consider going public with my fiction. It was strictly clandestine and only a hobby.
Then the needs of small children convinced me to switch to part-time teaching. For the first couple of years as a mostly stay-at-home-mom, it was all I could do to complete the metamorphosis from domestically-challenged career woman to culinary-queen and housework goddess. (Okay...Some transitions are never fully realized.) But later, when the kids got old enough to be in school for six hours a day, the characters in my head found time to come out again. Murderers, cops, victims, lovers. I started writing down everything they did and said, then finally decided to see if anyone but me wanted to read about them.
Now, I lead a double life. Some days are spent in the university classroom or at the rehearsal podium; others spent chasing villains on my laptop.
So what do I do when I'm not creating music teachers or psycho murderers? (Two unrelated populations, I assure you.) With a husband, two children, and way too many furry, feathery, and scaly things, there isn't a lot of time left. It's enough to keep up with the house, the yard, and the family schedule, and hope no one on my laptop gets murdered when I'm not looking.

Authors website is here.
Now for the Giveaway: Hachette is allowing me to give away 5 copies of One Scream Away. This contest is open to USA and Canada only. No P.O boxes. Deadline to enter is July 28th at 5 PM. Good luck!
For your official entry leave a comment.
For 3 bonus entries become a (google friend connect) public follower~ already a follower? Thank you, that counts too.
For 2 bonus entries post link to contest on your blog, sidebar is great!
I don't twitter but if you do, tweet about the contest and give me the link, you'll get another bonus entry.
***Please leave all your comments in one box and be sure to include an e mail address. ***
Posted by Kaye at 5:10 AM