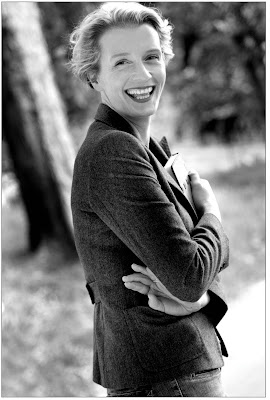 Today it is truly a pleasure to welcome Wendy Holden, author of Beautiful People. Wendy has written an insightful piece about humor. Sit back, relax and enjoy what she has to say and then we'll get to the giveaway.


Humour is so personal. As a comic writer I write about what makes me laugh. Otherwise, you’re second guessing what might amuse people in an awful, after-dinner-speech kind of way, which would be depressing. (Although I can see a comic scene even in that; an after-dinner speech going horribly – and hilariously – wrong). But it’s probably true to say that I can spot the potential humour in something faster than someone who doesn’t write romantic-comic novels for a living. You develop an eye and you recognise how the unlikeliest situations can yield some amazingly funny material. I was at a very dull meeting at my children’s school the other day for instance; someone said something about pushy mothers and suddenly an entire novel scenario leapt into my head, which I’ve just started working on.

Celebrity lives are positive volcanoes of brilliant comic material; I can never understand why people take them so seriously, let alone aspire to be like them. They’re a gift for people like me; you simply can’t make them up – from Brad Pitt’s horrible new beard to those women who think the world will take them more seriously if they wear ethical diamonds to the Oscars. So Beautiful People was a joy to write, enabling me to give full rein to a fabulous mixture of hilarious celebrity craziness, from stars with ‘thinstructors’ to get them in shape for awards ceremonies to vertically-challenged studio heads who make their taller executives sit on kids’ furniture.

I’ve heard novelists say that Hollywood is beyond parody but I don’t think that is true. Nothing is beyond parody in my view. Not even contemporary art, although I admit it stretches the boundaries more than most. I’ve just finished a book called Gallery Girl which is a comedy set in the mad world of modern art. Inventing the various ridiculous works for the ‘edgy’ galleries – hairy pebbles, wheelchairs sprayed gold, heads made of frozen pee and so on – was a joy. It made me snort while I was writing it so I hope it will have the same effect on readers.

I am lucky though; I had a great comic apprenticeship as a writer; I was working as a newspaper journalist and had the weekly task of making the incoherent ramblings of a well-known British socialite into a magazine column. At first I was pretty annoyed about it – having to do the work for this woman who spent her life flouncing from party to party. But then I realised what a terrific opportunity this was to flex my comic muscles. I would pick out all the silliest anecdotes (like the time her boyfriend landed his helicopter in her parents’ orchard and blew all the petals off her mother’s borders) and make as much of them as possible; the sackfuls of mail the column attracted soon showed I was making a lot of people laugh with it. And Tara, the socialite, soon got into the groove as well and was very co-operative. The experience formed the material for my first novel, Simply Divine, after which I’ve never looked back.

I think comedy is something British women do especially well for some reason – my favourite authors include Nancy Mitford, Richmal Crompton, Sue Townsend and Posy Simmonds (look them up if you don’t know them). They are all comic geniuses; they notice everything. But there are some great American female comic writers too, one of the funniest books I have ever read is The Serial by Cyra MacFadden; it’s a send-up of the Sixties California lifestyle and made me laugh so much when I read it I cried – which was embarrassing as I was in a train at the time.

****Who are some of your favorite comedy writers? Tell me in the comments! ****


BEAUTIFUL PEOPLE by WENDY HOLDEN—IN STORES APRIL 2010!
A witty, utterly addictive novel from bestselling author Wendy Holden, Beautiful People is a tale wicked in its observations yet buoyant at its heart: an irresistible confection you’ll want to devour immediately.

Darcy—a struggling English rose actress when The Call comes from L.A. An Oscar-tastic director. A movie to make her famous. The hunkiest costar in Hollywood. So why doesn’t she want to go?

Belle—a size-zero film star but she’s in big, fat trouble. Hotter than the earth’s core a year ago, she’s now Tinseltown toast after her last film bombed. Can she get back to the big time?

Emma—a down-to-earth, down-on-her-luck nanny trying to weather London’s cutthroat childcare scene and celebrity mom whirlwinds. What will it take for her to get back in control of her own life?

Jet to London, Hollywood, and Italy; toss in a passionate star chef, a kindhearted paparazzo, and a reluctant male supermodel; and find Wendy Holden at her best—a smash international hit.

ABOUT THE AUTHOR Wendy Holden (U.K.) was a journalist on The Sunday Times, Tatler and The Mail on Sunday before becoming a full time author. She has now published nine novels, all top 10 bestsellers in the UK, and is married with two young children. Her novels include Farm Fatale (in US Stores from Sourcebooks Landmark in July 2010), Bad Heir Day (also coming to US stores from Sourcebooks Landmark in September 2010), Simply Divine, Gossip Hound, the Wives of Bath, The School for Husbands, Azur Like it, and Filthy Rich. For more information, please visit http://wendyholden.net/.
Sourcebooks is giving away two copies of Wendy's book, Beautiful People. This is one you don't want to miss! Not sure what it's all about?
See my review!

Contest details are as follows: