Giveaway/guest post by Susan Frasier King, author of Queen Hereafter: A Novel of Margaret of Scotland 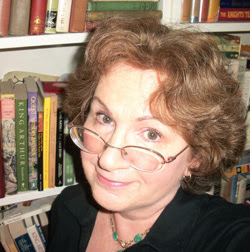 I'd like to welcome Susan Frasier King to PPP today. I asked her to tell us a little bit about Margaret, the lead character in her new book, Queen Hereafter. Here's what Susan has to say. Giveaway opportunity at end.

Queen Hereafter tells the story of Margaret of Scotland, queen of Scots in the 11th century—a Saxon princess, Hungarian-born, she was descended from Alfred the Great and became a refugee from the Norman Conquest. Shipwrecked with her escaping family along the Scottish coast, she married her protector, King Malcolm Canmore, who had defeated Macbeth for the throne of Scotland. Margaret succeeded Lady Macbeth as queen of Scots, and so she seemed a perfect subject for a sequel to my novel about Lady Macbeth—and Margaret was an intriguing woman in her own right.

A good deal is known about Margaret, which is unusual in an early medieval queen and made the research and the writing easier in some ways than my novel about Lady Macbeth—and in some ways more complicated, as so much was known that some, inevitably, had to be cut from the novel. The contrasts in Margaret’s life and character were fascinating—piety and worldly power, gentleness and temper, obedience and mischief, saintliness and temptation: all those angles were part of her. She emerges from history as a real young woman thanks to a rare medieval biography written by her friend and confessor, Bishop Turgot—who seemed a pretty dry character in history until I discovered that Turgot, or Thorgaut, was a Viking name, and that this priest and monk had previously escaped from a Norman prison and had been shipwrecked and rescued by monks, so that he joined their order after his recovery. Tor, as he’s called in the novel, idealized his friend Queen Margaret, but in his biography of her, he left tantalizing hints of a vital, fascinating young woman.

Her biographer seems to have fallen under Margaret's spell—which says something about her personality. Reading between the lines of Turgot’s biography, Margaret comes across as a very real and fascinating character. And there is a lovely fairytale element to her true story that has such naturally romantic elements that a story was easy to develop: a beautiful, exiled young princess, a shipwreck, love at first sight (so says Turgot!), a brawny royal husband who adored her, eight healthy children, and enough charm and determination in this foreign queen to win the affection of the resistant Scots and then change them, bringing them from the Dark Ages, basically, into the Middle Ages. Margaret’s influence in that transition was quite significant, as medieval historians note about her. Yet some inner torment kept Margaret from being truly happy despite all she had – her story was hard for a historical novelist to resist.

Margaret is a crucial part of Scottish history at a critical moment, the period of the Norman Conquest of England, which threatened Scotland’s well-being too. She had a cosmopolitan upbringing in Hungary and then the English court; Edward the Confessor was her uncle, and after his death, when the Normans invaded England, she and her mother and siblings fled. Their ship wrecked on the Scottish coast and they came under the protection of Malcolm Canmore – and Margaret’s contribution to Scottish history, and to the history of women in power, began.

Turgot created an amazing document in his Vita S. Margaretae, written for Margaret’s daughter—it’s full of wonderful anecdotes about her, insights into her character, and verifiable facts. Other sources mention Margaret and her family, such as in annals and charters. The rest of the picture is provided by historical events and the actions of her husband, Malcolm Canmore, her brother, Edgar the Aetheling, and others.

Despite the amount of information available about the real Margaret, writing a novel about her required filling lots of historical gaps, extrapolating and leaping in order to bring history to life. I wanted Margaret to emerge in the novel as a real, vulnerable, sympathetic character. Part of the challenge was that she was represented as perfect and virtuous in her lifetime, a woman who later was named a saint. But along with the perfection were hints of flaws and quirks, such as her temper, her sharp intelligence, her impatience, her tendency to be very hard on herself and others, all revealed by her biographer along with her more idealized qualities. I was looking for the real Margaret, a young woman in a strange land, who was not always so sure of herself—a young woman who fell in love with a man who was very nearly her complete opposite—a love match that even the earliest historical sources attest—and a woman who loved deeply, passionately, not only her husband and children, but her loyalties, her causes and charities, and her adopted country of Scotland. I discovered that Margaret of Scotland was a complex woman who seemed very real to me—and I hope she seems that way to readers of Queen Hereafter too.

Thank you, Susan, for visiting today and letting us see how you did such extensive research. Quite fascinating!

Like what you read? Would you like your own copy? Thanks to The generosity of Crown Publishing, 2 giveaway copies are available. Open to US only.  Just leave a comment saying you would like to be entered. Be sure to leave an e mail in your comment. Deadline to enter is Dec 23rd.