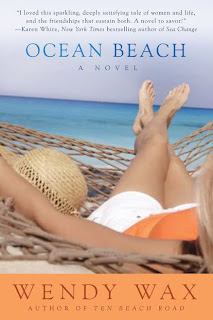 Unlikely friends Madeline, Avery and Nicole have hit some speed bumps in their lives, but when they arrive in Miami’s South Beach neighborhood, they are all hoping for a do-over. Literally. They’ve been hired to bring a once-grand historic house back to its former glory on a new television show called Do-Over. If they can just get this show off the ground, Nikki would get back on her feet financially, Avery could restart her ruined career, and Maddie would have a shot at keeping her family together.

At least, that’s the plan – until the women realize that having their work broadcast is one thing, having their personal lives play out on TV is another thing entirely. Soon they are struggling to hold themselves, and the project, together. With a decades-old mystery—and the hurricane season—looming, the women are forced to figure out just how they’ll weather life’s storms…

My thoughts:   Wendy Wax has done it again - written a captivating novel with some truly wonderful characters. As a followup to Ten Beach Road where the women, Nikki, Avery and Maddie first met under somewhat dire financial circumstances and forged a strong bond of friendship, Ocean Beach takes us on the next step in their life's journey.

Nicole: Almost broke, her matchmaking business kaput and feeling alone, Nicole is still experiencing  some guilt about turning in her brother Malcolm to the FBI. Malcolm's ponzi scheme was solely responsible for her, Avery and Maddie losing all their money in the first place and becoming joint owners of the house on Ten Beach Road.

Maddie: At a crossroads in her 26 year marriage to Steve, Maddie finds a core of strength she never knew she had and is more determined than ever to be independent and resourceful. She knows what is important and she strives to do everything for the good of others. She's the quintessential mother.

Avery: A little more prickly than the other women in the group, Avery is still carrying the hurt and anger at her mother, Deirdre, for abandoning her for a Hollywood design career. Now that Deirdre is back and on this project, Avery is having a hard time putting the past behind her and moving on. With a failed marriage in her past, she also has some serious self image hangups. It was gratifying to watch her work on these issues.

Deirdre: Still guilt ridden about leaving her family when Avery was young, Deirdre is trying her best to make Avery understand how much she does love her and that her foolish decision to leave was not out of indifference. Ms.Wax  aptly put the reader into the heads of both mother and daughter showing their sides of the story.

Kyra: Maddie's young daughter whose unfortunate affair with a celebrity leaves her as a single mom but now that she has her head on straight, she's doing her best to provide her son with a stable life. It was Kyra's idea to film the women rebuilding Ten Beach Road that led them to a contract with the TV station to do over Ocean Beach. Kyra may be young but she has a good business head on her shoulders and a promising career as a videographer. When she was emotionally threatened, she responded in such a mature way, I was rooting for her the whole time.

The introduction of Max, the house's 90 year old owner, really brought the plot together. I adored Max!

Ms. Wax not only manages to flesh out her characters so well that by the time the book ends you will feel like these women are lifelong friends, but she also incorporates a heart wrenching mystery into the plot.  Ocean Beach has the right blend of elements that make for a good read: endearing, strong women characters, intriguing male characters, credible dialogue, a little romance and a plot that will keep you interested to the last page. Even the "bad" characters have their place. Oh, I hated to see it end but I loved the ending and so hope Ms. Wax has more in store for us with these characters. I am not ready to let them go. Not by a long shot. I couldn't put it down. 5*****


Disclosure: A review copy of the book was provided by Berkley in exchange for my honest opinion